This post is long overdue. I wrote in in April 2014, but we traveled through Singapore in June 2013. Better late than never, right?

I should probably start of by saying, that I'm totally aware that sushi is not really Singaporean, but somehow I wanted to have it in the title.

So were to start? I guess for most travelers (unless those few enlightened ones who claim to not have any expectations of a country before visiting) it starts with expectations and possibly even fears about the next country.

After cycling through Malaysia and Indonesia we've had dozens of people idolize the country for us. The Mekka of South East Asia. Most of those people have never been there or if so, they've hardly set foot outside of Asia and lack comparison. I guess it's always like that wherever you go:

Don't go to country X, the people will steal from you or worse.

Or as in the case of Singapore, it would be the opposite: go to Singapore, it's like Europe. That one is especially funny, since Europe is neither a country nor does it compare in any way to Singapore (except for wealth, which is probably what they were refering to).

I'll admit that economically speaking Singapore is a wonder child, but we're not here to talk about that, are we?

So the mental picture I had, was of a city like Dubai, but while staying in Singapore it felt quite different. 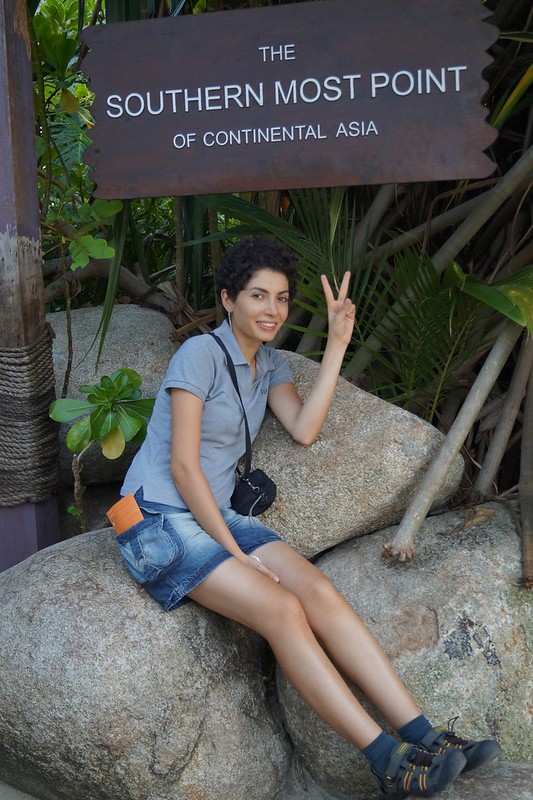 It's all about the passports

Everything started with immigration, where Hajar once again had to give a special interview, because of her passport. Her first interview in Indonesia was quite stressful and almost saw us on the boat back to Malaysia, but this time we came prepared and it was super easy. Everyone knows that Singapore is really, really small, but it still has a couple of different districts, most of which are much less impressive than the core of Singapore. The country/city could thrive of really cheap migrant workers and those occupy the outer areas of the island and the difference in housing, road conditions etc. shows. 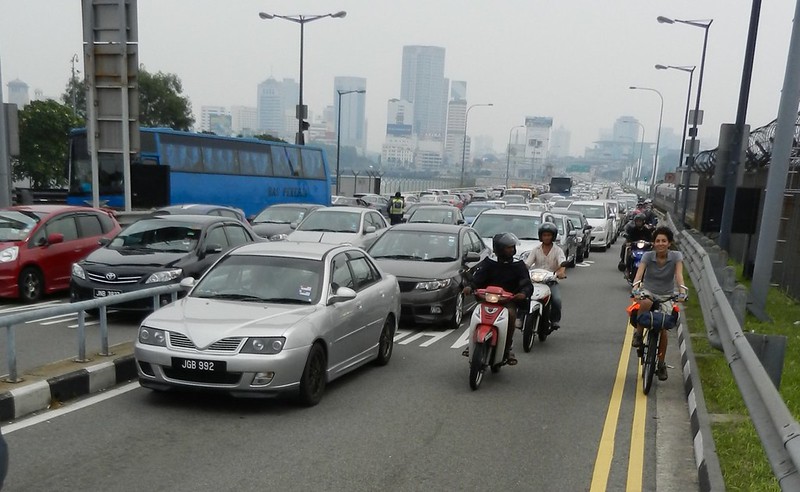 Thanks to the GPS on my phone (for other cyclists carrying an Android: check out Osmand, it's really awesome) it was easy finding the way to our hosts Patrizia and Bruno from Switzerland. 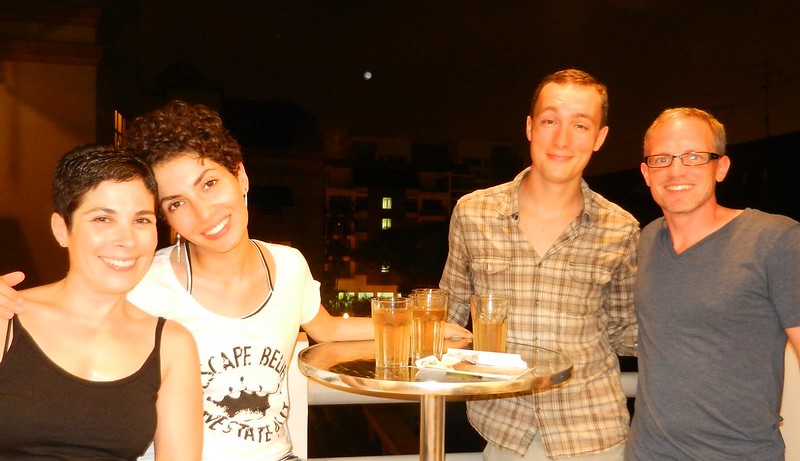 Now over the course of my travels I've stayed with dozens of hosts, but Pat and Bruno are worth mentioning on their own. If there were an official definition of the perfect warmshower hosts it would surely be them.

I shouldn't give away everything already, but those who followed this blog know that I'm not a city guy, so it won't come as a big surprise that Singapore has not blown me away with it's skyscrapers and shopping malls. Singapore was a great experience for us however - and I've noticed this trend for other countries I've traveled before - because of the great people we encountered.

So imagine you've just cycled through 30km of heat and smog (more on that later) in a city around mid-day and then your host opens the gates to their beautiful apartment building, hugs you and welcomes you to their home. Patrizia and Bruno are veteran travelers and they know what weary cyclists need to lift their spirits: a cold drink, a cool shower and a bed with Swiss chocolate on the pillows.

[Pat and Bru if you're reading this, don't worry about people running down your door, not many people still read this blog :P]

Apart from just being awesome hosts in every possible way, we've learned a lot from them about traveling, but - and I'm not sure they were aware of that -also about relationships. Traveling on and off around the world for six years on a tandem is probably the best relationship builder one could imagine and they radiate happiness.

Our sightseeing plans were often spoiled by record levels of air pollution. Indonesia with it's vast area of palm oil trees, burns off the old stumps every year and if the wind blows East, Malaysia and Singapore are shrouded by thick layers of smog. On the bad days we stayed inside or went shopping (finally treated myself to a beginner DSLR) and otherwise we went out on our bicycles through the city. 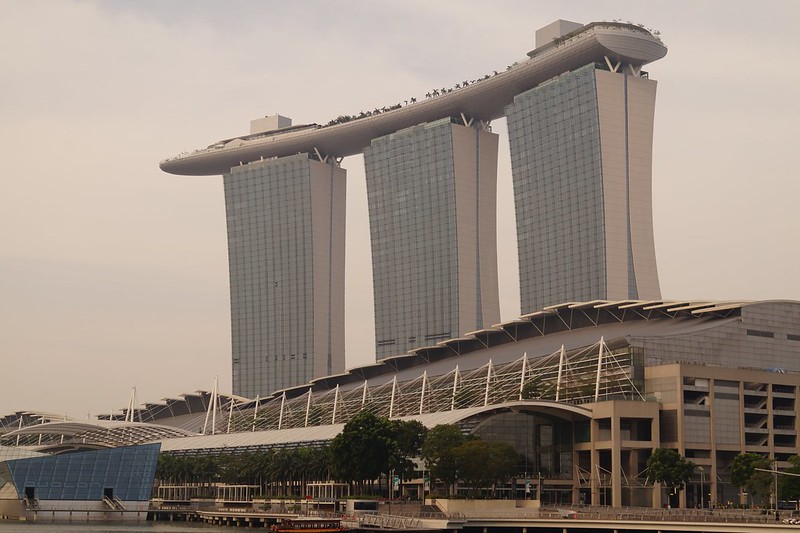 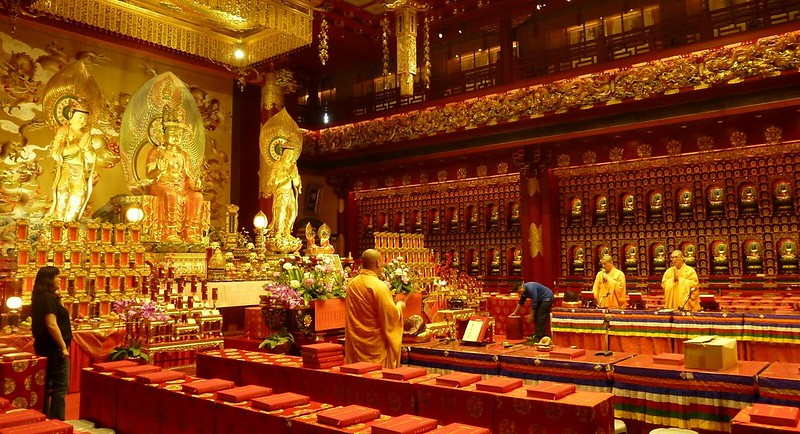 The roads in Singapore were safe and drivers are not as crazy as in other South East Asian countries and so the bicycle was actually quite useful in the city. There's a couple of things to see like a hotel with a boat on top or some luxury islands, but what is much more special is the food in Singapore. There are a bunch of special Singaporean foods, but none of those were vegetarian so I can't really judge. There is however a great variety of Asian and international cuisine, where there is something for every taste I'm sure. Hajar got her first try of sushi and other specialties like octopus. 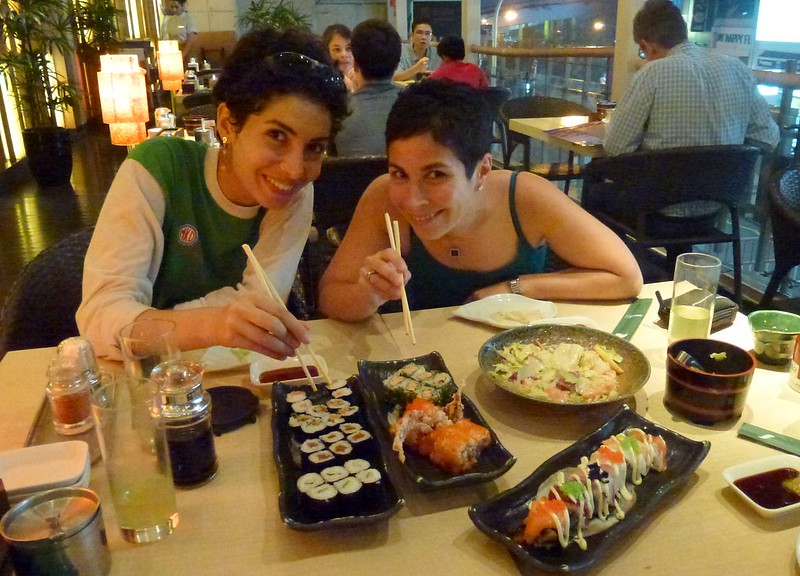 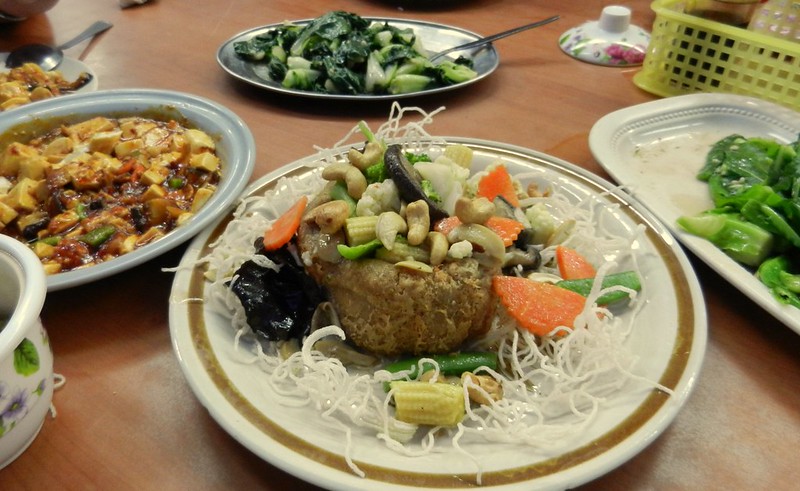 For people living there it's a great hub for travels around the continent due to dirt cheap flights and many Singaporeans will travel to another country for a weekend trip. 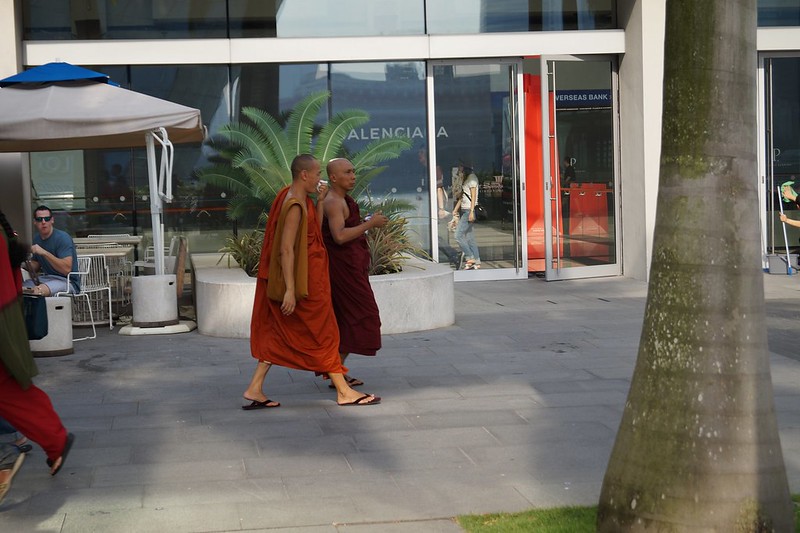 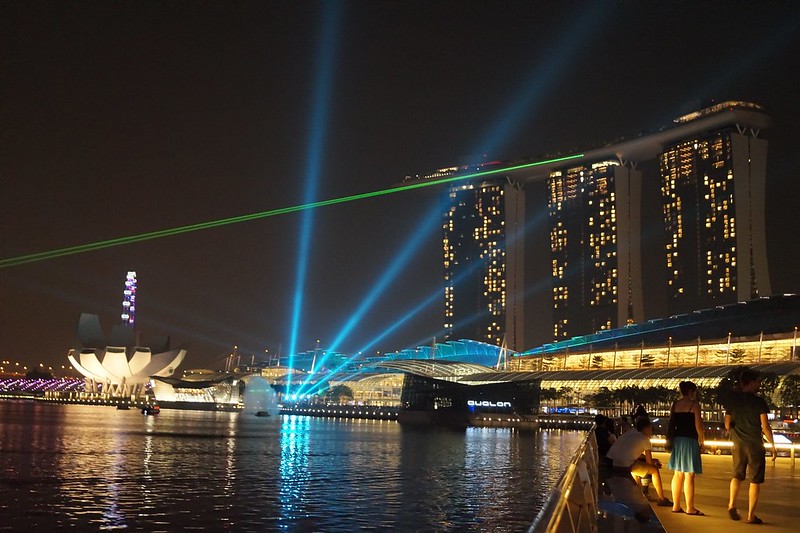 In Malaysia we were surprised by the negative effects that smart phones, tablets and social networks had on young people (i.e. sitting opposite each other without saying a word for more than half an hour, even on dates) and from what we could see in the short time that we've been there, it seems to be even worse in Singapore. We felt that in general, the newly gained riches (Singapore was all jungle 50 years ago) are being displayed proudly by the natives. So there goes the stereotype of the less materialistic Eastern spirit. 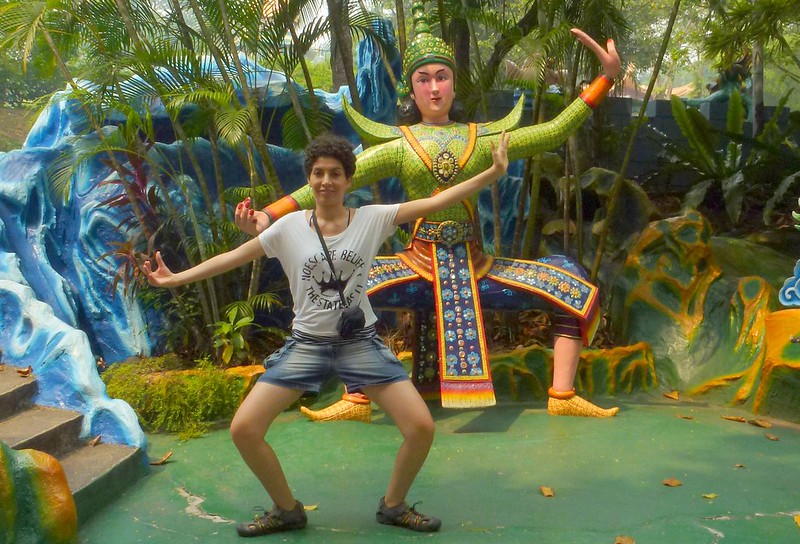 On the other hand I felt that Singapore is less fancy than Dubai (not that I really care about that).

Singapore is for a different kind of traveler or maybe for a few years of work (like most dwarf countries in my opinion), but we're both glad we've been there and we're glad to have met our great hosts (over the next couple of months we met a couple of other travelers by accident who've also met them and experienced the same). 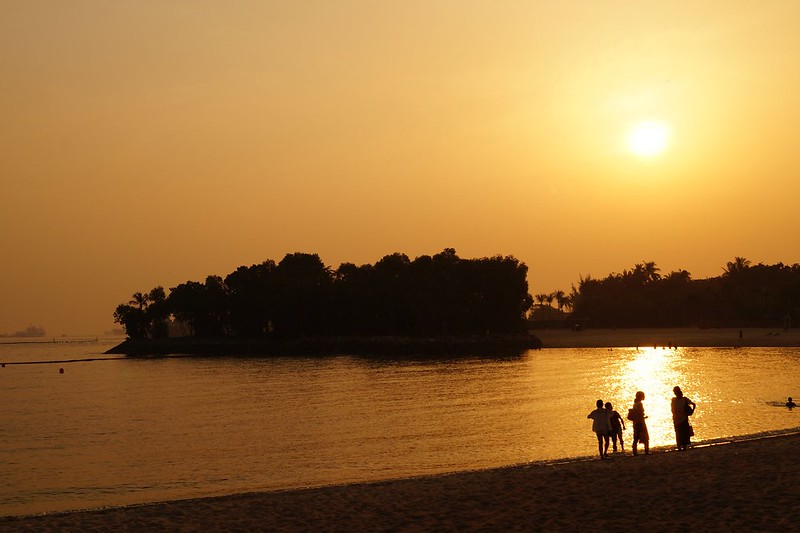 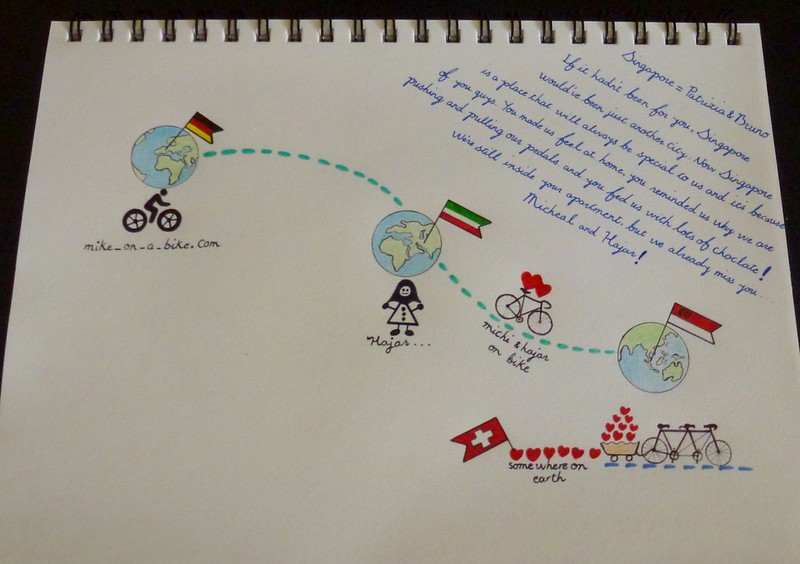 (*) This one is of course from the famous travelers movie Into the Wild. I've disagreed with that statement a long time, but this trip has shown me the truth behind those words.